Be the Choluteca Bridge or adapt and survive 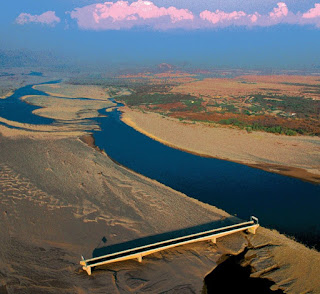 The Choluteca Bridge or the Carías Bridge is a suspension bridge located in Choluteca, Honduras.  The bridge was constructed in 1930, and rebuilt in 1996.  Knowing the bridge was likely to face extreme hurricanes, the Honduras government commissioned some of the best minds dealing with bridge construction in the world to build a bridge that could withstand any hurricane.  It was indeed a state-of-the-art bridge, which could withstand the high speed winds and hurricanes that are not uncommon in the region.

In 1998, Hurricane Mitch hit Honduras hard.  Hurricane Mitch was categorized as category 5 (252 km/hour or higher wind speed), Mitch devastated the entire Caribbean region and Honduras was not an exception.  Roads were swept away, buildings were destroyed and almost all bridges were destroyed.  Choluteca Bridge stood majestically amidst all the doom.  Indeed the best minds from the bridge construction fraternity did not let down the Honduras Government, well almost.  Mitch caused the river underneath to change course and carve out a new route for itself.  So essentially, the Choluteca Bridge with all its grandeur stood there but lost the very purpose of its existence.  Choluteca Bridge was thus a bridge leading to nowhere with no roads on either side but it did leave us with an important lesson.

Foresee, plan and adapt quickly before we are rendered redundant just like the Choluteca Bridge.  This is true for one's career and more importantly in the stocks that one holds in his/her portfolio.  Perhaps the time and age for starting and ending a career in the same field is an idea which has long passed its use by date.  More importantly, the time for a buy and hold portfolio perhaps long gone as business are made redundant at a much faster pace.  The Wuhan virus is the Hurricane Mitch of 2019-2020 and in all probability we will be facing other forms of Hurricane Mitch in our lifetimes, time to adapt and survive.

Posted by Nirmalya Deb Roy at 10:13 PM No comments:

Aadhaar is a 12 digit unique identity number (random number) which is assigned to all Indians (resident as well as nonresident) based on their demographics and biometric data (all 10 fingerprints, two iris scans and facial photograph).

According to UIDAI, "Aadhaar number is devoid of any intelligence and does not profile people based on caste, religion, income, health and geography. The Aadhaar number is a proof of identity, however, it does not confer any right of citizenship or domicile in respect of an Aadhaar number holder.

Aadhaar is a strategic policy tool for social and financial inclusion, public sector delivery reforms, managing fiscal budgets, increase convenience and promote hassle-free people-centric governance. Aadhaar can be used as a permanent Financial Address and facilitates financial inclusion of the underprivileged and weaker sections of the society and is therefore a tool of distributive justice and equality. The Aadhaar identity platform is one of the key pillars of the ‘Digital India’, wherein every resident of the country is provided with a unique identity. The Aadhaar programme has already achieved several milestones and is by far the largest biometrics based identification system in the world.

Aadhaar identity platform with its inherent features of Uniqueness, Authentication, Financial Address and e-KYC, enables the Government of India to directly reach residents of the country in delivery of various subsidies, benefits and services by using the resident’s Aadhaar number only."

Benefits of Aadhaar therefore can be enumerated as:
Aadhaar based direct benefit transfer.  The benefit transfers may include but not limited to LPG subsidy, fertilizer subsidy (for farmers), MNEGRA.
Verification of income tax returns through Aadhaar OTP.
Passport in 10 days.
Opening of bank account in a few seconds.
Quick provident fund disbursement.
Jeevan Pramaan, i.e., life certificates for pensioners.
Digital locker.
Getting a new mobile number in seconds.
For investments (reducing the chances of benami investments).
Driving license (to avoid a person having multiple driving licenses).
Voter card linking (to avoid duplication).

A BEAUTIFUL SIDE EFFECT OF AADHAAR NUMBER:
Citizens of India who for some reason might get lost (children, old, mentally challenged or a person who has memory loss after suffering shock) can be brought to an Aadhaar center, and a simple biometric scan will give the entire details of the citizen. This, to my mind, is the best side effect of having an Aadhaar number.

"Sitting is the new cancer"

“Sitting is more dangerous than smoking, kills more people than HIV and is more treacherous than parachuting. We are sitting ourselves to death,” says James Levine, a professor of medicine at the Mayo Clinic, in an interview in with the LA Times.

Of all things that could be dangerous to your well being, the last thing that could come to your mind would probably be the chair, but Dr. Levine says “The chair is out to kill us.”

I would not hesitate to estimate that in cities we spend almost 60-70% of your productive life sitting, be it sitting for commute (car/bus/airplane), sitting at work, watching television/sitting in front of the screen, or having lunch/dinner or reading a book.

Studies show that exercising regularly in a gym does not completely reverse all the ill effects of prolonged sitting simply because 9 hours of sitting cannot be undone by an hour of exercising.  When you are sitting for prolonged hours, metabolism slows down by over 95% and thus all the chemical and electrical activity of your body comes almost to a standstill.

The exact reason why sitting increases cancer risk is still unknown, but scientists have found a number of biomarkers that are present in higher levels in people who sit for prolonged periods.

"There are several types of cancer that are believed to be caused by inactivity. Christine Friedenreich, an epidemiologist at Alberta Health Services-Cancer Care in Canada, estimates that 173,000 cases of cancer in the U.S. are due to inactivity, with 49,000 cases of breast cancer and 43,000 cases of colon cancer. The other cancers linked to inactivity are lung (37,200), prostate cancer (30,600 cases), endometrial cancer (12,000 cases), and ovarian cancer (1,800 cases) could also be related to excessive sitting."

The above data shows that colon cancer is second only to breast cancer but since breast cancer is easily diagnosed and mostly at a very early stage, it is no more a killer cancer.

Colon cancer is the third most commonly diagnosed killer cancer in both men and women. Colon cancer is an "equal opportunity" disease that does not discriminate against gender, race or geographic location. Colon cancer is slowly gaining epidemic status. Colon cancer is a silent killer as there are no specific symptoms for colon cancer and only way out is prevention (i.e., early detection with regular colonoscopies). When a patient develops symptoms, the cancer in all probability is at an advanced/late stage and by the time the surgeon gets a chance to see the patient, s/he has a few months to live.

The most common no-nonsense approach to this would be standing desks.  Recently many corporations are introducing standing desks in their office to de-risk their staff from cancer but my guess is that this (standing desks) will reduce the ill effects of prolonged sitting only to increase another set of problems, viz., varicose veins, low back pain, muscle stiffness and general muscular fatigue.

As more studies starts coming up we might get a better hold on the effects of sitting and our well being till then one might try to take a stroll every 25-30 minutes during work, if you are commuting by public transport prefer to stand, watch television while walking on a treadmill, walk when you are talking on your mobile.

Sitting or standing per se is not dangerous but it is the duration of sitting/standing which can cause irreversible effects on your well being.